Many Midwest Counties Are Getting Younger 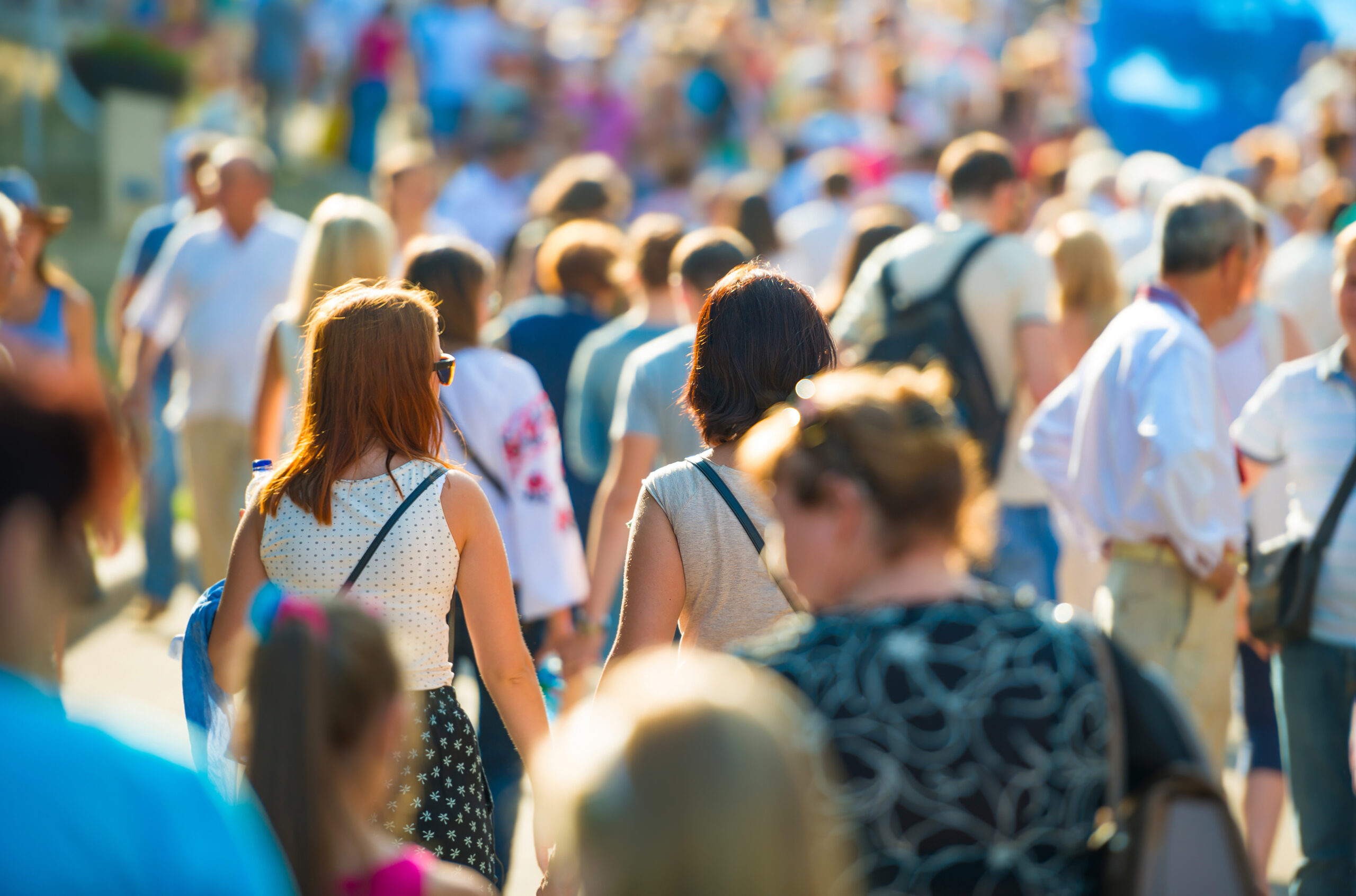 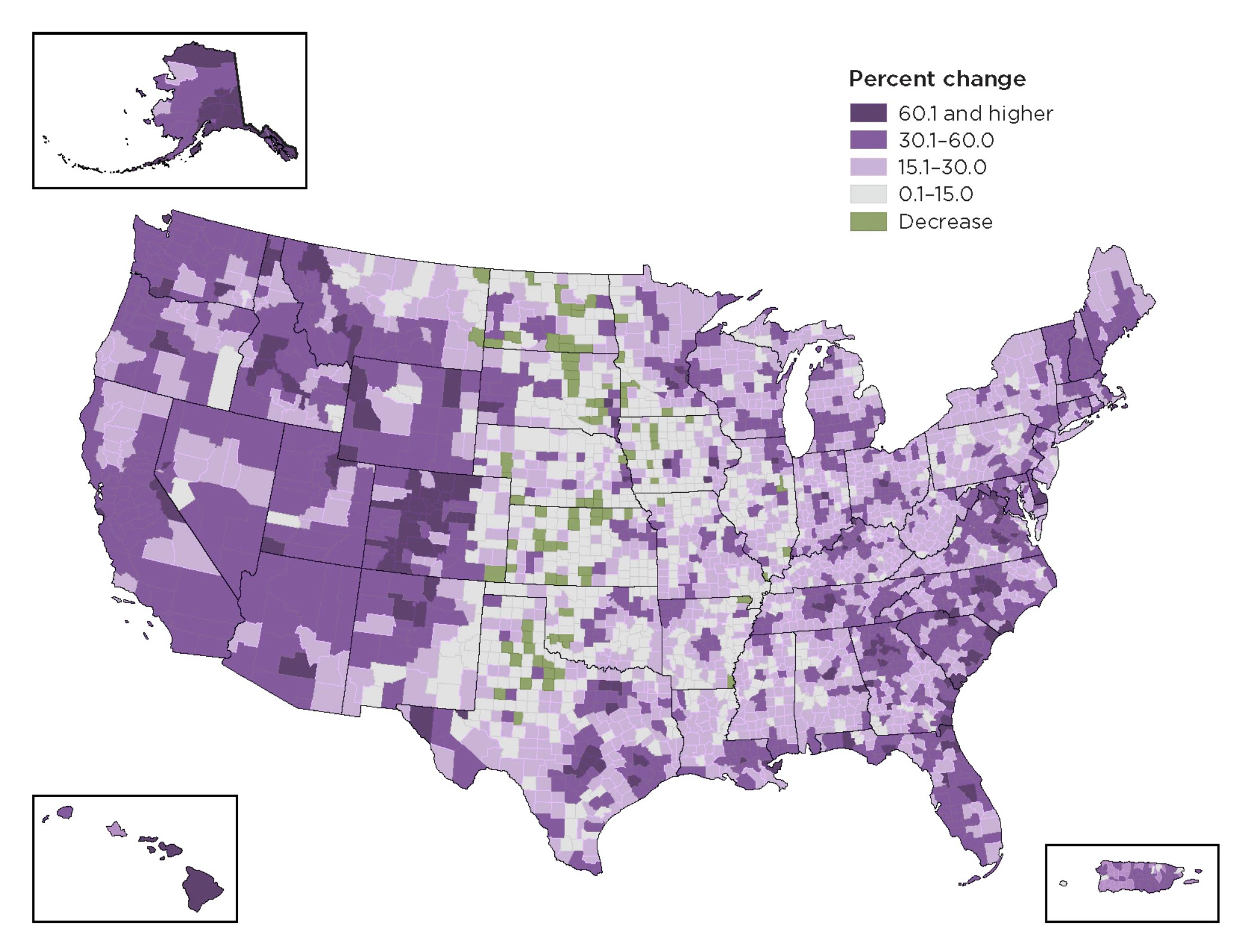 Based on U.S. Census data, almost 17 percent of counties in the U.S. showed a decrease in median age between April 2010 and July 2017. The majority of these counties were in Midwest, representing 51.4 percent of the nation’s 531 counties that were getting younger. Some of the most significant decreases in the counties with 10,000 people and more were in North Dakota, South Dakota, and Nebraska. For example, Williams County in North Dakota had the largest decline in median age, decreasing by 7.1 years.[4] In 2018 and 2019, Williams County was also the fastest-growing county with a population of 20,000 or more in the last ten years. The rapid growth between 2010 and 2019 was mainly due to net domestic migration, natural increase, and net international migration.[5]

Nevertheless, this pattern of counties getting younger does not refer only to Midwest. Many of the 531 counties are located in a band that runs through Great Plains from Montana to Texas (Figure 2).[6] 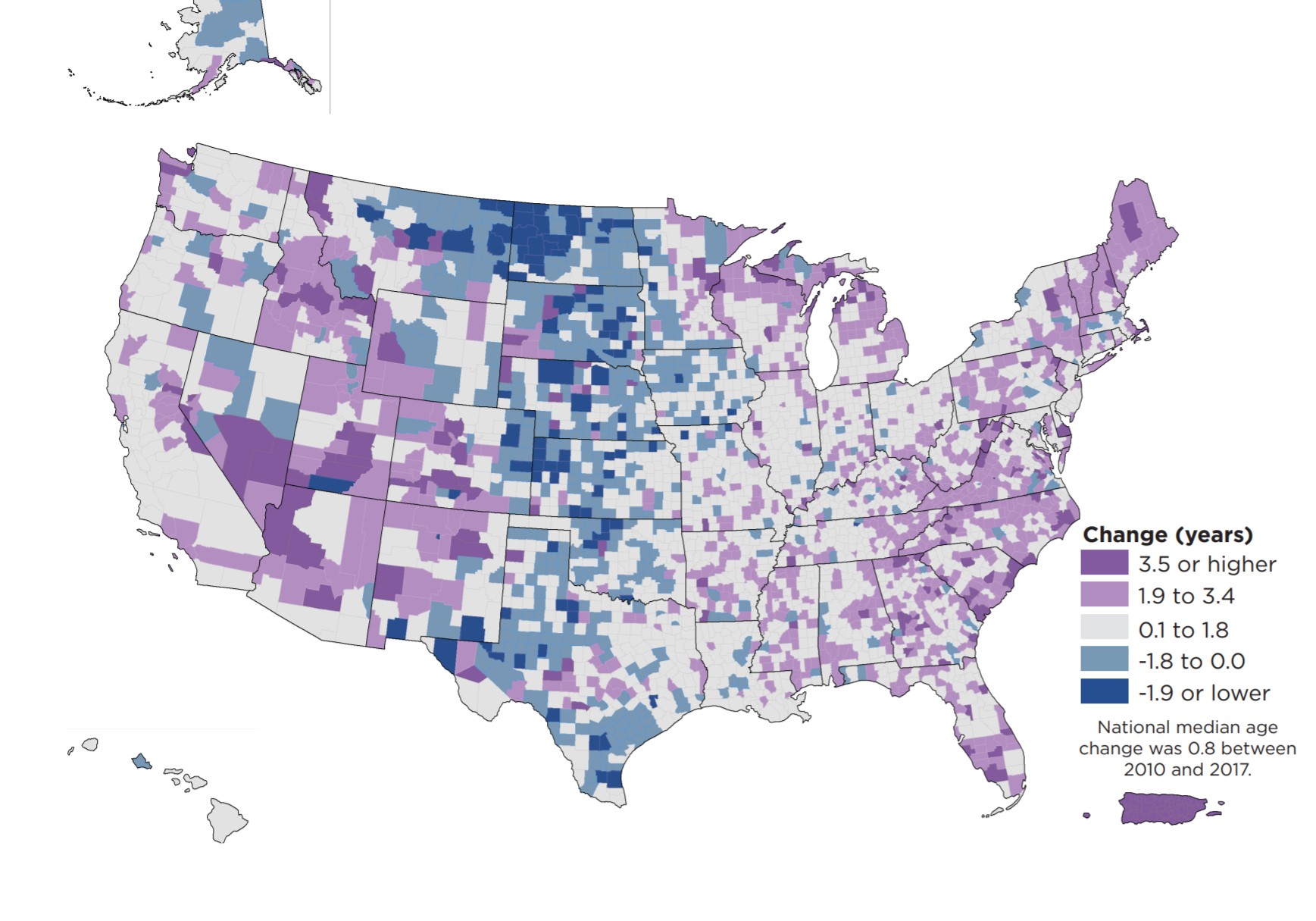 A closer look at the North-Central Region shows that seven out of twelve Midwestern states belonged to the top-fifteen states with the negative or very low positive increase in median age between 2010 and 2019. These states were North Dakota (-1.7 years), Iowa (0.4 years), South Dakota (0.5), Ohio (0.7), and Minnesota, along with Indiana, both indicating 0.9 years of median age increase (Figure 3). 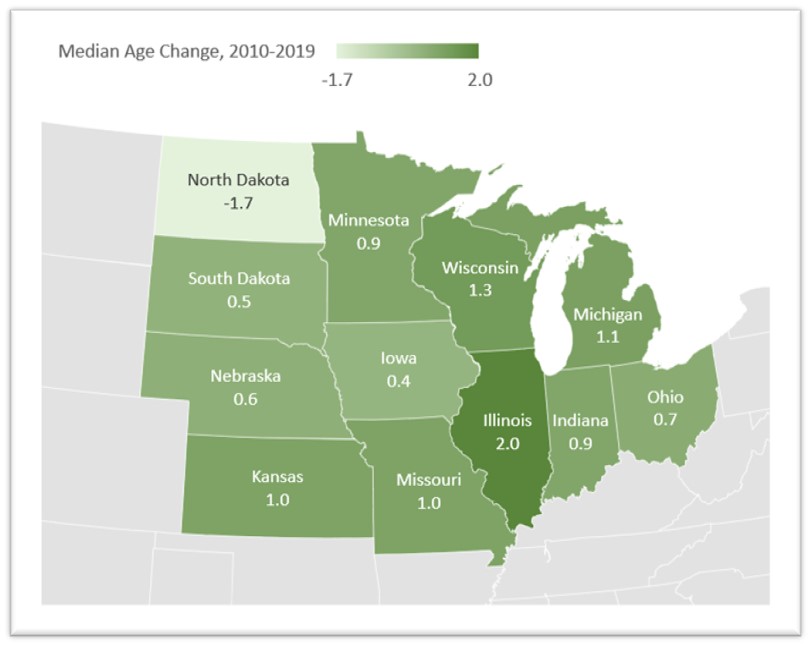 What are the factors driving the changes in the median age nationally and in Midwest?

There has been significant growth in the number of 65-and-older population since 2011. This group is the fasted group category that has grown by over a third since 2010. Moreover, the under 18 years old population has been getting smaller since 2010, partially due to a lower fertility rate in the U.S.[7]

Still, while the nation is projected to continue aging, almost one in five counties have been getting younger. A median age decrease has been seen particularly in the North-Central Region during the 2000s. The U.S. Census Bureau defined several essential drivers of change in counties with median age decrease between 2010 and 2017. 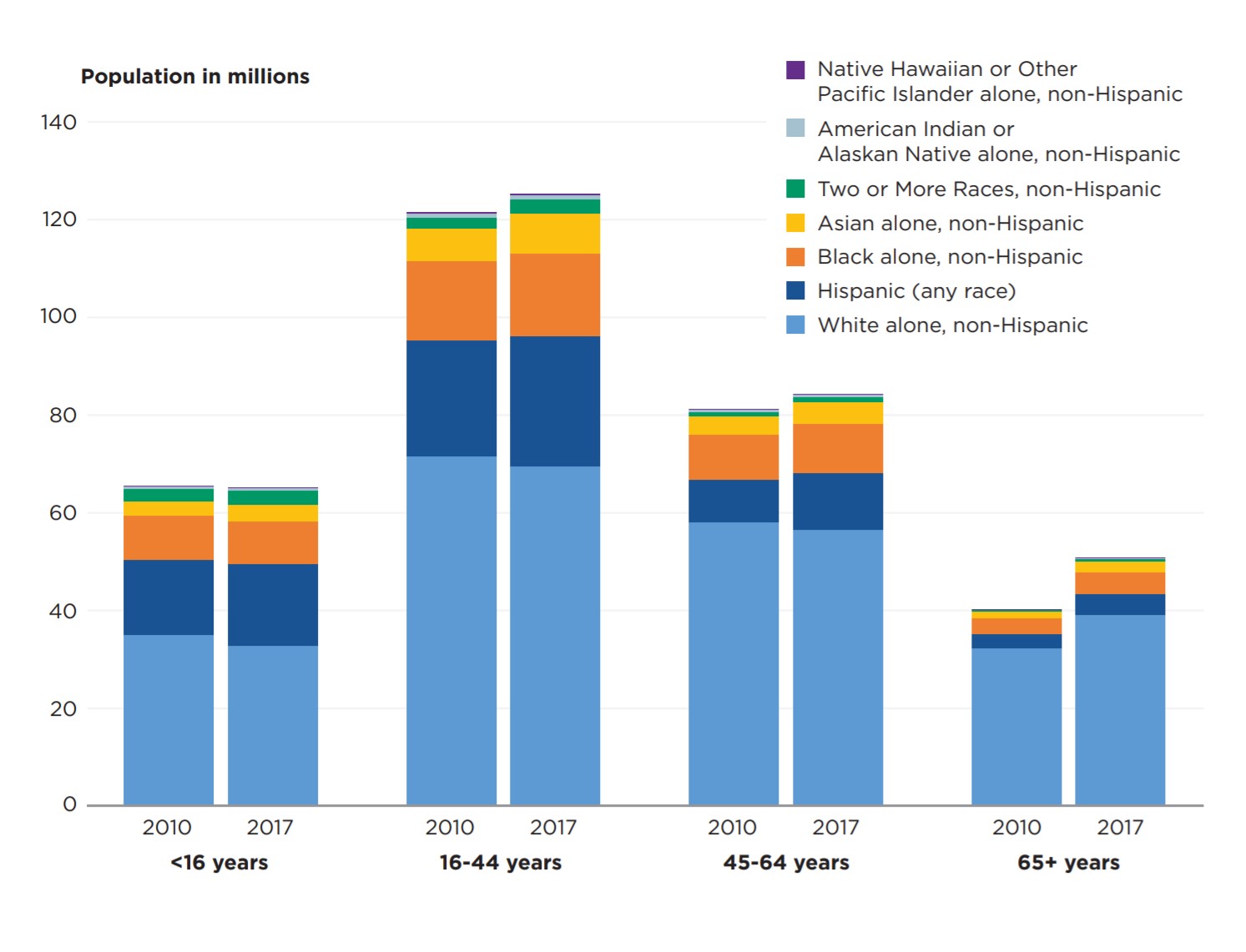 Particularly in North Dakota, the oil boom in the early 2010s attracted thousands of workers to the western part of the state. A large influx of domestic migrants led to the growth of both the Hispanic and non-Hispanic populations.

The median age of any county can be reduced by the presence of universities and large colleges. There are about 19.9 million college and university students in the United States, and most are under 25 years old. Several of the younger counties are home to these post-secondary institutions. Almost one-fourth of the county’s residents are enrolled in graduate school or college in some of these counties. Other reasons leading to the relocation of young people include a move for work, family, friends, and preference of place they want to live.[10]

Figure 5. The largest drivers of population change in counties with median age decrease: 2010 to 2017 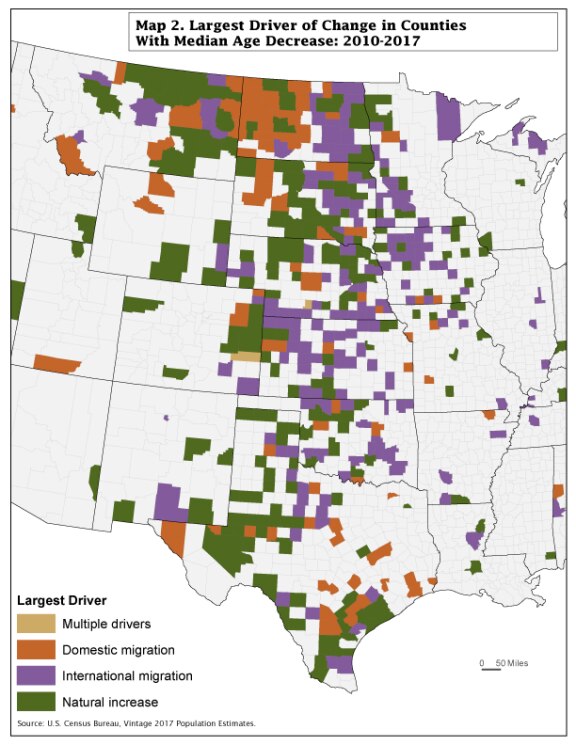 A natural increase can also cause population change. Some ‘younger’ counties in western parts of the Great Plains, particularly North Dakota, South Dakota, and Nebraska, have been experiencing a growing number of new families. In these states, the youngest counties have more than ten percent of residents under age 5 (Figure 5).[11]

[1] The median age of population is the age that divides population into two numerically equal groups. Half the people are below this age and half are above it.

Join us for the next NCRCRD Webinar on October 12, 2022 – Health Care Access Among Self-Employed Workers in Nonmetropolitan Counties
See Upcoming Webinars
Our Regional Data Resources encompass resources at national, regional, and state levels.
View Resources
Sign up for the NCRCRD e-newsletter to stay up-to-date on NCRCRD events, webinars, and news.
Sign up for email updates
×